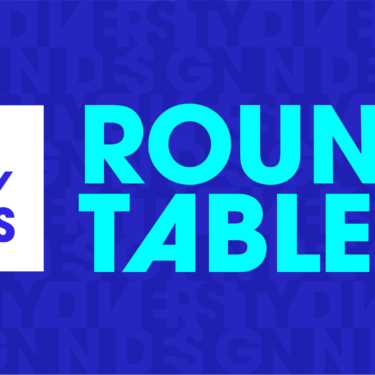 You’re invited to join us for the continuation of our Diversity in Design: cALL for Ideas conversation. On April 14th we will be conducting a panel discussion followed by smaller participatory roundtable discussions. This is the first of a two-part roundtable series with the goal being to gain a deeper understanding of issues and challenges and to develop potential actionable ideas to share and implement with the greater design community.

Senongo  is a digital designer, illustrator, and the founder of Pixel Fable, a collection of interactive Afrofuturist stories. Growing up in Nigeria, working for almost a decade in Japan, and now calling New York home, Senongo brings a complex, global perspective to his design practice. His writing on culture and design has been published in A List Apart, Smashing Magazine, and Net Magazine, and he is a regular speaker at design and tech events. His talks focus on digital storytelling, transmedia, and cross-cultural design issues. Senongo’s storytelling and design projects have been featured in The New York Times, Slate Magazine, and NPR. Twitter: @senongo

Gail Anderson, Designer, Writer, and Educator
Gail is a New York-based designer, writer, and educator. She is a partner, with Joe Newton, at Anderson Newton Design. Gail Anderson is co-author, with Steven Heller, of the upcoming The Typographic Universe, as well as New Modernist Type, New Ornamental Type, New Vintage Type, Astounding Photoshop Effects, American Typeplay, The Savage Mirror, and Graphic Wit. She is a contributor to Imprint and Uppercase magazine. Anderson teaches in the School of Visual Arts MFA, undergraduate, and high school design programs, and has served on the advisory boards for Adobe Partners by Design and the Society of Publication Designers. She currently serves on the board for the Type Directors Club, and is a member of the Citizens’ Stamp Advisory Committee for the US Postal Service. Anderson is the recipient of the 2008 Lifetime Achievement Medal from the AIGA, the 2009 Richard Gangel art direction award from the Society of Illustrators, and has lectured about design (and her bottle cap collection) at organizations and conferences around the world. Twitter: @GailAndersonNY

Jesse Conner, User Experience Designer
Originally from Tallahassee, Florida, Jesse has been practicing UX Design since the Fall of 2015. In a previous life she taught the LSAT and worked in Public Relations. During her spare time Jesse enjoys rock climbing, reading Sci-Fi novels and playing fetch with her corgi Indiana. Twitter: @Oh_Jesse

Riley Hooker, Graphic Designer and editor of Façadomy
Riley is a graphic designer based in New York and editor of Façadomy, a publication that explores threads in contemporary identity through art and architecture. Hooker’s work has been exhibited in the New Museum for Contemporary Art, The Queens Museum and The Shanghai Biennale. Twitter: @rileyhooker ‏

Moderator
David Frisco
David is a current Design Fellow at Public Policy Lab. He is the founding partner of IntraCollaborative, a socially minded design collective comprised of Pratt MFA graduates. He is an Adjunct Professor with CCE in the Undergraduate and Graduate Communications Design departments at Pratt Institute. At Pratt, David is Co-Creative Director of Design Corps, a pro-bono design program for organizations with socially and environmentally minded missions. David holds an MFA in Graphic Design from Yale School of Art and a BFA in Graphic Design from University of Illinois at Chicago. Before heading out east, David was a Senior Designer at the Museum of Contemporary Art, Chicago.

AIGA/NY Diversity in Design: cALL for Ideas is a series of events open to the entire NYC design community to discuss, refine, and incubate ideas on how to solve the most pressing issues of exclusion, bias, privilege, and inequity in our own profession.

AIGA/NY believes that diversity is essential to excellence, achievement, and creative innovation. Through our Diversity & Inclusion programming and initiatives, we aim to foster the culture of inclusion in which all individuals feel respected and are treated fairly, and different perspectives, backgrounds, opinions, thoughts, and ideas are encouraged and embraced.